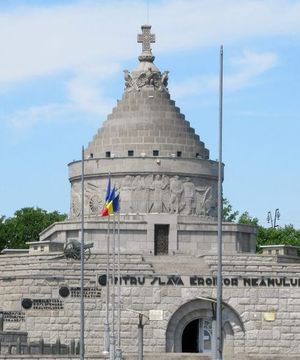 Author’s Note: I humbly submit February’s edition of  Cait Gordon’s 2020 Flash Fiction Challenge,‘ featuring a mausoleum as this month’s setting, the object is a pair of goggles, and the genre is goth romance – all in 1000 words. Thanks for reading and enjoy! BTW: I have no clue what is goth romance! : )

Lifelong friends Adrian Ciobanu and Daniel Popa travelled around the world the past ten years. Now, in their sixties, they shared many of life’s joys and tribulations together. The harshest occurred twenty years ago. The high-tech business they founded in Canada went under, and amidst lawsuits of corruption, the company’s doom left the two penniless. Financial stresses led to Adrian divorcing his wife of ten years, who refused to live on meagre income. At the time, Adrian envied Daniel, who didn’t have any familial dependencies.

After struggling for many years to regain their footing, they decided to pack their bags and set out to their globe trotting. They were savvy and learned to live with little means while enjoying the freedom of not being tied down by societal rules and conventions. After a decade of travel, they tired of meandering the planet and returned to their country of their birth, Romania.

They took residence in a cemetery near the borders of Transylvania. No one, not even brave tourists, ventured into the dark, centuries-old graveyard.

In the far corner stood a small building. The monument resembled a miniature version of St. Paul’s cathedral in London, mounted on a small hill. It served as a tribute to many a fallen warrior, and housed dozens of dead soldiers.

When they arrived, the entrance to the crypt was locked at the base of the knoll, but Adrian jimmied it open with a crowbar. The mausoleum provided the two shelter from the torrential rainfalls while they commiserated about their lives.

Daniel took to writing. The permanent stop from travelling offered him a chance to document his and Adrian’s travels. On the few days it didn’t rain, he’d venture out of the crypt and sat under an ancient tree. It faced a large tomb with an open grave. He often wondered why it never been filled, but it offered him inspiration to put pen to paper. He crafted stories explaining the reason for its existence.

Under his tree, Daniel felt the pinch of loneliness with his new graveyard life. He reflected more on his past and regretted the loss of his former wife from a time before he knew Adrian. He missed her youthful spirit and humour, and the overall comfort of having a spouse.

One hot summer day, he fell asleep, only to be awoken to a torrential rainfall. He grimaced at his water logged notebook, and fished in his pocket for a pair of swimming goggles and strapped them on. He always had them, as he developed a quirk of never wanting his eyes exposed directly to water.

He jumped out of his skin once his eyes adjusted to them. A beautiful woman wearing a long gown and ringlets in her hair stood in front of the grave. A bright light glowed around her, making her visible in the night’s darkness, and she managed to stay dry under the deluge. Daniel guessed she might’ve been close to his age, and looked familiar to him.

“I have been awaiting an eternity for you to come.” She held out her hand for Daniel, who stood and took it.

They walked hand-in-hand around the cemetery. The woman introduced herself as Elena, and offered little about herself apart from how she waited for her man to return. Daniel, excited to spend time with a woman again talked of his travels. Elena would laugh and slap his arm every now and again, making Daniel feel a special connection that had escaped him for decades.

Returning back near the mausoleum, Elena faced Daniel. “I’ve yearned to see you for so long.” She leaned forward, and kissed him with a deep passion of a long lost lover.

“Good night, my love,” she said after the long embraced. Her hands slid down his back as she softened her hug and touched the top of his buttocks. “Find me again soon. I would love to spend a more intimate night together.”

She turned and walked away, leaving Daniel staring after her in the pouring rain. He entered his home, and pocketed his goggles.

“Where were you?” yelled Adrian. “I worried you got washed away in the storm!”

“I met this wonderful woman. It was like magic. It’s like I’ve known her forever.” said Daniel. He recounted every detail of his romantic evening to his friend.

“I think we should leave,” suggested Adrian. “Between the effects of this place and your writing, I think it’s causing you to hallucinate. It’s been a while since we’ve been in America. Let’s return to Ottawa. I’m sure we can find you a new wife there.”

After some more debate, Adrian relented and decided to indulge Daniel’s fantasies.

For the next several days, Daniel ventured out to his hangout and returned disappointed. Adrian mocked him each night, annoying Daniel to no end.

The rain poured on the seventh night since Daniel met the lovely Elena. He donned his goggles for the first time in a week, and vowed to return with his love and introduce her to Adrian. Adrian laughed at Daniel as he exited the mausoleum.

Adrian grew concerned when he noticed Daniel hadn’t returned past midnight. Poor man is so deluded, he’ll stay up all night to prove me wrong, he thought. He went to sleep and awoke a few hours later at dawn. No Daniel.

In a state of consternation, Adrian wandered the cemetery. He had no clue where Daniel spent his time, and being a huge graveyard, his panic escalated realizing his companion could be lost.

After a couple of days, he found Daniel’s ancient tree, and he noticed a freshly covered grave. The tombstone read: Elena Popa and Husband, 1782-1838.

A Grave Encounter © 2020 Bruce Gordon. All rights reserved. No part of this work may be used or reproduced in any manner whatsoever without permission except in the case of brief quotations in critical articles and reviews. For more information, contact Bruce Gordon.

Bruce Gordon lives in the ’burbs of Ottawa with his author wifey and their beloved instruments. A musician since his teens, he still plays, but has also ventured down the writing path.

His upcoming novel, Dissatisfied Me, A Love Story, is about a 49 year old on the verge of his 50th birthday, who reminisces about his life while sitting alone in his room in his mother’s basement.